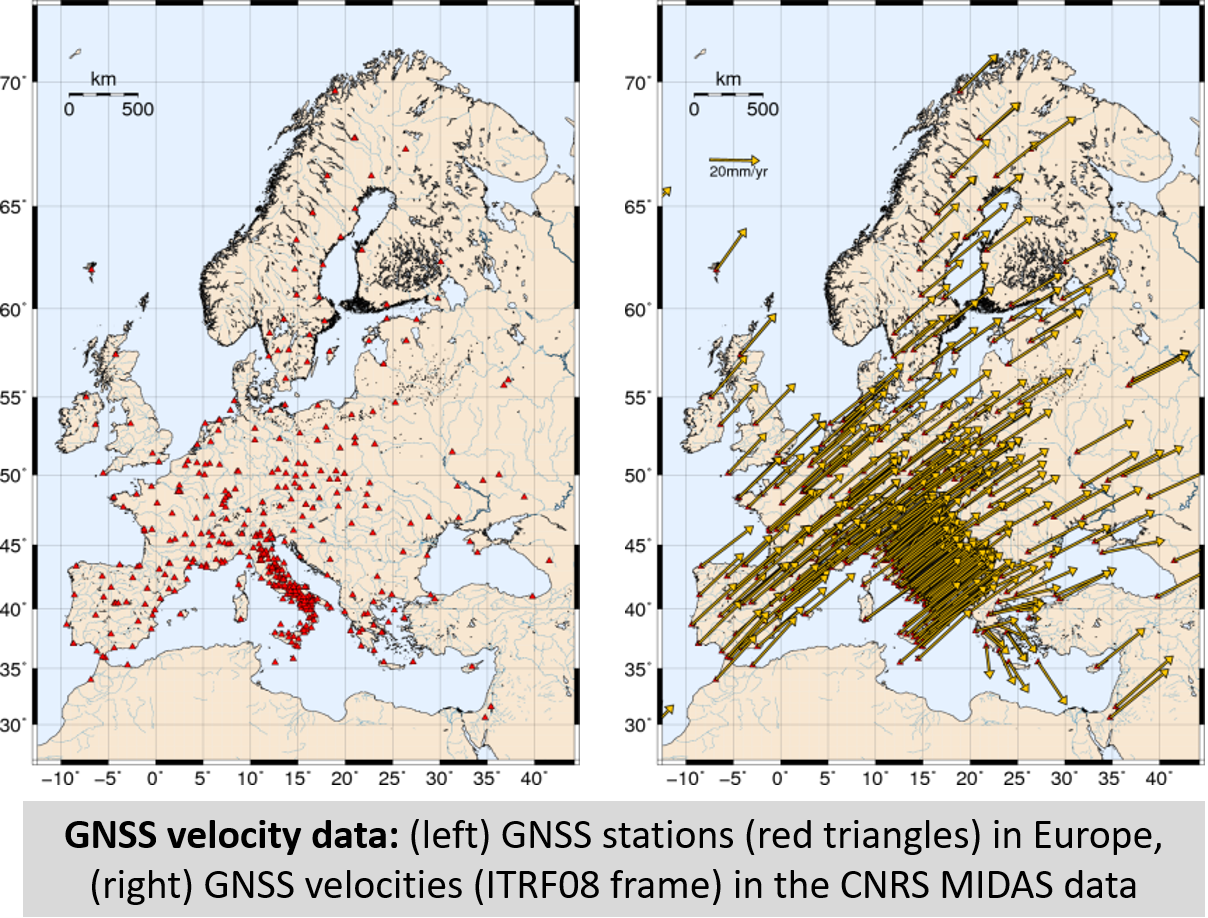 Within project EPOS-IP it is foreseen a high-level product to be delivered from TCS-GNSS, that is the strain rate map of Eurasia. Strain rate is a fundamental mechanical property of a body or medium and describes the changes in shape, geometry and configuration of any medium of any size (and thus of a lithospheric plate) with time. As the ancient Greek philosopher Heraclitus declared “Panta rhei” or "everything flows" it is expected that all bodies on the surface of the planet will modify their shapes, growing or diminishing over the geological history. While geology beautifully describes changes in size of objects it is with space geodesy that we can quantify the rate of change with unprecedented accuracy.

As part of TCS GNSS, the National Observatory of Athens (NOA, Greece) and Lantmäteriet (LM, Sweden) are going to estimate strain rates as a periodic product for EPOS-IP using GNSS velocity fields of whole Eurasia which are regularly updated by EPOS partners CNRS / INGV / FOMI. To accomplish this, two open-source software packages have been implemented, STIB (Strain Tensor from Inversion of Baselines), developed by Masson et al., (2014) and VISR (Velocity Interpolation for Strain Rate) algorithm (Shen et al., 2015), as well as one commercial software (SSPX software suite; Cardozo and Allmendinger, 2009) was used. Our efforts also included the production of a brand new, python-based, open-source software, the StrainTool which is freely available to users.

This summer we have created the first strain rate maps for selected areas in Europe, including a few validation tests, and we presented our first results in the 36th European Seismological Assembly in Malta (September 2nd to 7th, 2018). In this congress, we showed preliminary results from 452 permanent European GNSS stations, operating until 2017 and processed at UGA-CNRS (University Grenoble Alpes, Centre National de la Recherche Scientifique). We calculated the strain rate field over western Eurasia using the horizontal velocities of the EPOS stations. The vertical velocity component is ignored in this stage and other sources of deformation (GIA, hydrological, anthropogenic et al.) are not considered in the interpretation.

To validate the first set of products, we turned into known regions of Eurasia that experience large and fast deformations, that is south Europe and Italy. The first strain rate maps include three main products for Italy and Greece, namely the dilatation rate, shear-strain rate and the principal strain rate axes orientations. We have statistically compared the results (which will be updated next year as more stations are coming in) and obtained several product similarities and differences. Overall, our first results reproduce the gross features of tectonic deformation in both Italy and Greece, such as NE-SW extension across the Apennines (D’ Agostino, 2014) and N-S extension in Central Greece (Floyd et al., 2010; Chousianitis et al., 2015).

It is anticipated that the significant increase of GNSS data amount associated with the operational phase of EPOS project in the forthcoming years will be of great value to perform an unprecedented, reliable strain rate computation over the western Eurasian plate.

The ERIC Forum is pleased to announce the election of Francisco Colomer, Director of JIVE ERIC, as the new Chair of the ERIC Forum.

The General Assembly 2021 of the European Geosciences Union (EGU) will be a virtual conference named vEGU21: Gather Online (#vEGU21).

The main aim of the workshop is discussing with the EPOS community on topics relevant for the sustainability of the EPOS Delivery Framework.